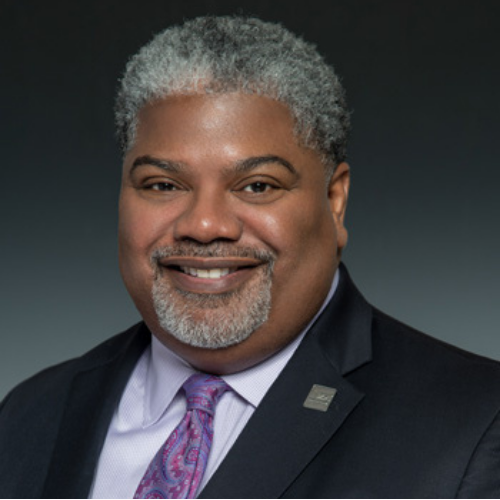 Robert Matthews, Vice President of Workforce Development and Exelon Utilities Chief of Staff, built BGE’s youth workforce development program from the ground up. Since the program launched in 2016, BGE has hired 15 interns into full-time, entry-level jobs. Baltimore’s first highly successful youth workforce development program for BGE, an Exelon company, has earned him recognition from his company and peers in the energy industry as CEWD’s inaugural Workforce Champion.

It’s not a long way from East Baltimore to Columbia, Maryland. Only about 25 miles. But it might as well be worlds away if you’re taking the bus, which turns an otherwise realistic commute into a difficult, two-hour journey. And that’s what stopped a teenaged Robert Matthews from accepting a prized internship with the Rouse Company, the famed creator of Boston’s Faneuil Hall and Baltimore’s Harborplace.

Matthews – now Vice President of Workforce Development and Exelon Utilities Chief of Staff – never forgot that turning point in his life, or how it made him feel. Decades into his career, it is insights such as this one that have fueled his passion for ensuring talented young people from underserved communities don’t miss connections to high-paying and rewarding career pathways due to circumstances beyond their control.

That passion and commitment are what drove Matthews to pioneer Baltimore’s first highly successful youth workforce development program for BGE, an Exelon company, earning him recognition from his company and peers in the energy industry as CEWD’s inaugural Workforce Champion.

“I couldn’t take that job with the Rouse Company, in a practical sense,” said Matthews, who ended up interning instead for a company that was still two bus rides away from his home but reachable within less than an hour. The experience left him with an indelible understanding of the unseen hurdles facing students who live in the inner city.

As he developed the internship program for BGE, Matthews asked himself: “How does this kid who lives on the east side of town get to west Baltimore before 6 am when the shift starts? If they’re going to be a part of this, they have to be here. So I arranged for transportation.”

The shuttle service added $20,000 to the cost of the program, but without it, many students couldn’t participate, he said. Matthews even picked one student up in his own car when the need arose.

Matthews built BGE’s youth workforce development program from the ground up. It started with a challenge from his boss.

Five years ago, he was working in human resources at BGE when his supervisor asked the entire team to take on a diversity and inclusion initiative of their choosing.

“I took that and called over to a local high school, Mergenthaler Vocational-Technical High School, or MERVO,” said Matthews. “I said, ‘MERVO is a trade school and you train students in construction, automotive technology, engineering and computer-aided technology. Why are we not connected? Why are we not hiring students from your school?’”

More than the job itself, what was important to those students was my own, personal story that I had gone to a school right across the street from there and lived in the same neighborhoods as they did and here I was.

“I went in to visit the teachers, very confidently, and said BGE had job opportunities for their students and they should hear me. They said, ‘Well, first of all we’ve been waiting for you. Let me tell you what else we need. We need professionals of color to come and talk to our students, not just about getting a job. We need you to show them that the pathway into those jobs is real.’”

“More than the job itself, what was important to those students was my own, personal story that I had gone to a school right across the street from there and lived in the same neighborhoods as they did and here I was.”

Out of this grew an 8-week, hands-on summer internship program for nearly 50 high school students in four regional career technology education high schools in Baltimore who are pursuing technical trades in automotive technology, electrical engineering, carpentry, computer-aided design and drafting, construction, plumbing or welding. The program includes a field assignment, professional development training and prep for the Construction and Skilled Trades (CAST) test. A shortened internship program is being offered virtually during the pandemic.

Since the program launched in 2016, BGE has hired 15 interns into full-time, entry-level jobs. It’s a win for the company because they have access to talented youth, a win for the students because they have access to career paths they might not otherwise know about, and a win to everyone in the area because it helps strengthen the relationship between BGE and the community it serves, said Matthews.

He remembers the moment when he realized the program had grown into something so much more than he ever imagined it would.

“We were holding a press conference, working with the mayor and the city’s youth jobs program. I was assigned to stand next to our CEO at the time, Calvin Butler, to make sure he had all the information he needed. I was so ready to whisper the details to him, but when the reporter asked him a series of questions,  Calvin knew everything. It was at that moment that I realized that this thing was something of value to and a priority for the company.”

That value was further solidified when parent company Exelon recognized the importance of what BGE was doing, appointing Matthews as lead executive to gather stakeholders across the company and create a unified function for workforce development.

But what really sticks with Matthews are those moments when he realized just how valuable the program was to the students in it. Like the intern who asked at the end of the program if he could keep his work ID. “I said, ‘No, dude, you can’t keep it. But why would you want it anyway?’ And he said, ‘I’ve been in a lot of places where I didn’t feel like I belonged, but it was different here. When I was in meetings they asked me my opinion. Even when I didn’t make eye contact, they wanted to hear from me. I’ve never been more confident than now to look at someone directly, extend a handshake and introduce myself. This badge is a symbol that I belong.’”

“It was definitely a moment that reminded us that we weren’t just getting people on a pathway to jobs, there were structural inequities left out of these kids’ development that we were bridging. We were making things happen that might not otherwise happen in their lives.”